1% Of Profits Being Donated to Plastic Oceans UK

← Go back to Shop

Blog Home » Alcohol You Can Drink on a Gluten-Free Diet

Alcohol You Can Drink on a Gluten-Free Diet

Whether you’re on a gluten-free diet by choice or because you suffer from an autoimmune condition like coeliac disease, it can be tough to find an alcoholic bevvy that tastes great AND is good for your belly. Your options are even slimmer if you prefer gluten-free drinks with lower alcohol content, like beer.

Fortunately, you don’t have to lose hope on your fun nights out or raucous nights in. There are still a few fabulous choices for gluten-free alcohol that will delight your tastebuds and get you buzzin’—from wine and hard cider to alcoholic kombucha!

Who are gluten-free drinks good for?

Gluten-free drinks are becoming more common, but there’s still way too much confusion about what’s safe to drink and what’s not if you’re on a gluten-free diet. Most people don’t even know why gluten-free foods are important!

Gluten is a protein found in wheat, barley and rye—three types of grain that are found in all kinds of foods and drinks. For the majority of people, gluten is totally fine to ingest. Our bodies are designed to process it like any other food. Sadly, some peeps struggle to digest gluten normally or feel uncomfortable and sluggish after eating it and should buy gluten-free drinks.

While anyone can enjoy a gluten-free bevvy, they’re best suited for a few different groups of people.

People who suffer from coeliac disease need to pay the MOST attention to gluten-free drinks. Coeliac disease is a troublesome autoimmune condition that’s triggered by gluten. Any time your body detects gluten, your immune cells go on high alert and start attacking the tissues in your digestive tract.

Not only is this extremely uncomfortable or painful to manage—it also can cause lasting damage to the intestinal lining and make it hard for your body to absorb nutrients. That’s why coeliacs have to avoid any and all foods that have gluten.

There’s another group of people who should probably avoid gluten products because their bodies are sensitive to gluten. These problems might not be as severe as those caused by coeliac disease, but they can still be super uncomfy to live with!

Avoiding gluten as much as possible can help people with gluten sensitivities avoid brain fog, bloating and other stomach problems.

Cutting down on gluten has become in an increasingly popular dietary choice, too. Some people report that removing or minimizing gluten in their diet has helped them enjoy fewer gastrointestinal problems, more energy and a healthier lifestyle.

This is especially important on the topic of imbibing. If you want to let loose with friends and enjoy a drink or two, choosing gluten-free alcohol may help you have fun while feeling better in the morning. Who can say no to that!? 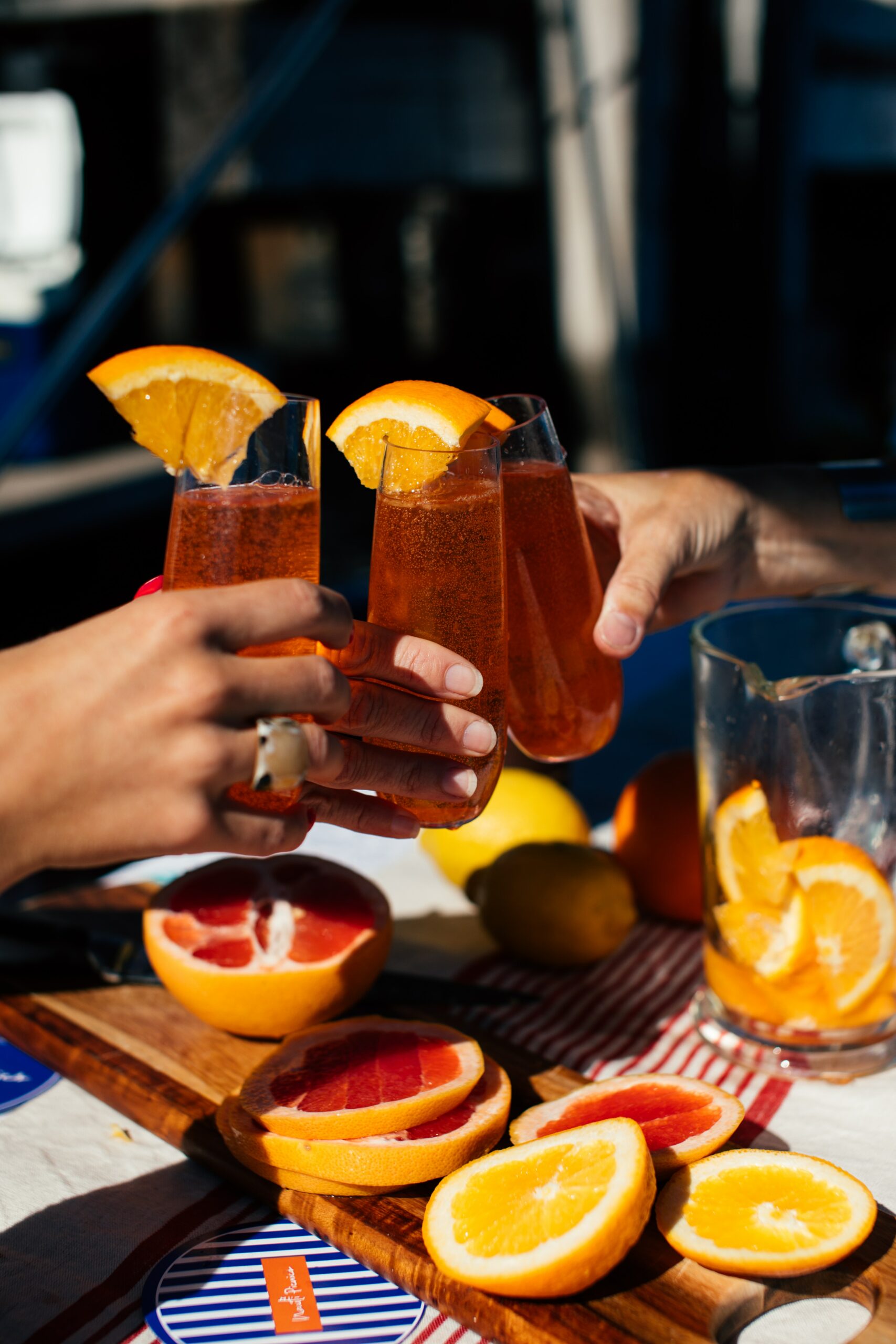 Most types of alcohol found at your average pub or liquor store will be made with gluten grains (boooo!). If you’re fully gluten-free, you’ll want to steer clear of any bevvies made with wheat, barley or rye.

Although some gluten-based alcohols like vodka, gin and whiskey are “supposedly” free of gluten because of the distillation process, some peeps with gluten sensitivities still report reactions to these drinks. We recommend staying away—better safe than sorry!

To keep your tummy calm, cool and collected on your wild night out, stick to these alcoholic drinks you can safely have on a gluten-free diet.

On a gluten-free diet and unsure of what drinks will keep your tummy safe and get your tastebuds soarin’? Here’s the scoop.

What is gluten-free alcohol?

What is gluten-free alcohol made from?

In most cases, hard kombucha is completely gluten-free! Traditional kombucha alcohol is made with kombucha’s four ingredients—tea, sugar, bacteria and yeast—none of which contain gluten. At Boozy Boocha, we infuse gluten-free vodka into our ‘booch, meaning it’s still totally safe for anyone on a gluten-free diet. The one thing you’ll want to watch for is any additives in your hard kombucha. Some ingredients used for flavouring may contain gluten (but none of Boozy Boocha’s do!).

Who should drink gluten-free alcohol?

Anyone can drink gluten-free alcohol, but it is better for certain groups of people. Peeps with coeliac disease should ALWAYS buy gluten-free drinks, since gluten can trigger painful symptoms and intestinal damage. Anyone with a gluten sensitivity can avoid stomach pain by sticking to gluten-free bevvies, too. Lastly, if you’re on a gluten-free diet for any health reasons, gluten-free alcohol is the way to go.

What alcoholic drinks can coeliacs drink?

Coeliacs can drink any type of alcohol that is 100-percent gluten-free. Wine, most hard ciders, gluten-free beers, liquor like tequila and rum and, of course, hard kombucha are all excellent choices! It’s smart for people with coeliac disease to double-check the ingredients list of their preferred alchy bevvies or check with the manufacturer if they aren’t certain whether a drink contains gluten or not.

Get a gluten-free buzz with Boozy Boocha

When you’re on a gluten-free diet, finding your alcoholic beverage of choice might take some experimenting, but you’re bound to find your fav soon enough. Rather than stick to the same boring list of gluten-free beers and wines, try our hard kombucha with a fun and flavourful kombucha pack!

Boozy Boocha’s kombucha alcohol is fruity, tangy and absolutely delicious, on top of being a healthier alternative to most alcoholic drinks. As a low-sugar probiotic beverage, it contains a TON of benefits you won’t find in any other bevvy. Being gluten-free is just the start! Our drinks contain only 92 calories, are vegan and have a bunch of vitamins and probiotics that benefit your health, inside and out. Start sippin’ with us—you won’t believe what you’re missing!

Stay up-to-date with all the latest BUZZ!

Sign up and fill up on our newsletter chock full of tasty offerings, delectable discounts, fruitful philanthropy, and juicy tidbits on life from your favorite Brewermasters at Boozy Boocha!